2019 saw dark clouds gathering over the UK’s construction sector. In anticipation of a troubled 2020, this saw professional services firm Arcadis encourage the Government to stimulate construction demand with tax incentives. The firm warned that Brexit uncertainty, combined with a wider global economic slowdown, was hitting business confidence, but lowering VAT or incentives for capital investment could remedy flat-lining demand for construction.

Following the turn of the year, however, Arcadis seems more upbeat about the prospects of British construction. In contrast to the construction fall that led to the recession of 2008, the consultancy believes that the slowdown in work has already bottomed out, meaning that deflationary pressures should also ease off. 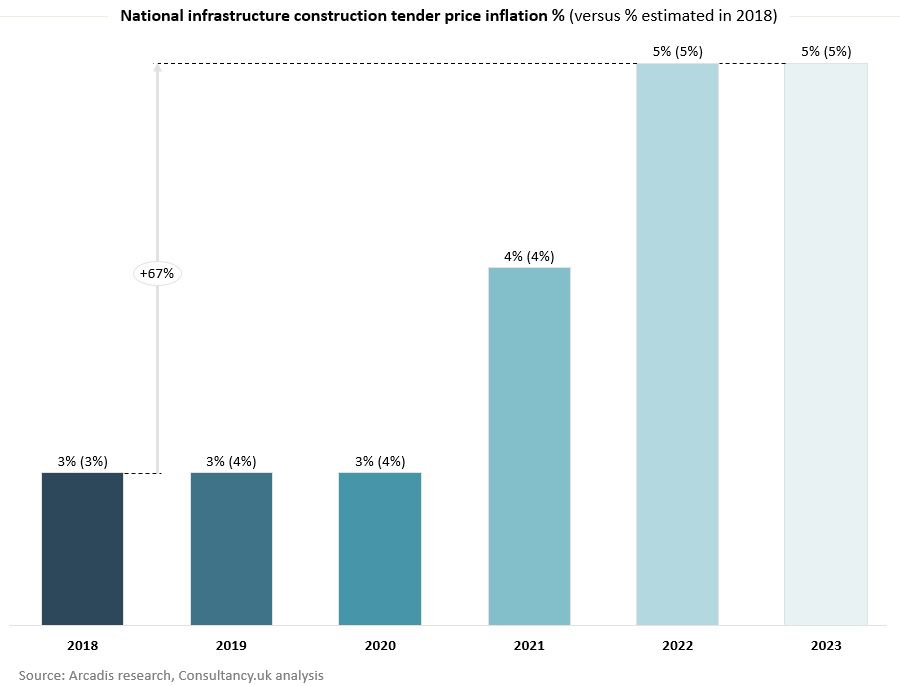 Citing surveys suggesting that construction order books are at their shortest since 2012, Arcadis’ 2020 UK Construction Market View contends that workloads are likely to improve from late 2020 onwards. As a result, Arcadis predicts tender prices for building works will rise just 1% in London this year, compared to its previous forecast of 3%. Across the regions, it had also previously been predicting 3% inflation in tender prices but this has now been downgraded to 2%, while nationally this has fallen from 4% to 3%.

Commenting on the findings, Simon Rawlinson, Head of Strategic Research at Arcadis, said, “We have long been calling for certainty and clarity on a long-term investment plan, yet alongside the prospect of increased infrastructure spending we also need to be aware that the government will want to get a lot more bang for its buck now. This means delivering in a way that is consistent with government strategies like the presumption for offsite construction, working in integrated teams and shifting industry thinking to make full use of innovative building technologies to increase performance, productivity and value.”

Arcadis believes that the situation will even improve despite the fact its previous forecasts did not anticipate the continuing stultifying effect of Brexit uncertainty on the UK construction industry, or the wider economy. In terms of activity increasing in the years ahead, the research asserts that because the country now has a single-party government with a workable majority, the political certainty of the coming five years will help turn stalled programmes from 2019 into projects ready to break ground this year.

However, beyond 2020, trouble could still be on the horizon. According to Arcadis’ updated estimates, tender price inflation could still leap to 5% by 2022, as the dust settles on the construction industry following Brexit, while an impending global recession looks to be increasingly on the cards.