A new survey of top banking industry figures has found that four key trends dominate the agenda of the UK’s key financial institutions. Digital transformation, Brexit, regulatory change and revenue growth are all at the forefront of executives’ minds moving toward the end of 2019.

More than a decade has passed since the 2008 global financial crisis, but the banking sector is still facing a number of key challenges if it is to return to full health in the future. According to a new study from Bishopsgate Financial, which saw the firm poll COOs, CIOs, Heads of Change and Senior Programme Managers from over 30 prominent financial institutions in the UK, four major trends stand out in particular.

First and foremost, the biggest of these is digital transformation. As with the rest of the business world, technology represents a crucial driver of change in the banking industry. The relentless move towards digital platforms continues to dominate the change agenda across the industry. The need to compete with FinTech competitors, while reducing costs and meeting the changing demands of customers means that the ongoing drive towards digital platforms and technology in banking shows no signs of slowing.

According to the survey, the single most significant area of focus relating to technology and innovation was data analytics. Another recent study from Protiviti similarly found that six out of ten finance leaders place leveraging data science and analytics for strategic insights and tactical decision making as top priorities for the coming year.

At the same time, Bishopsgate Financial predicted that robotics is set to see rising prominence in the near future. Last year, the firm held the view that early adopters of this technology would reap the benefits, but according to the study one year on, the firm now believes that the technology is ready for wide-scale implementation. 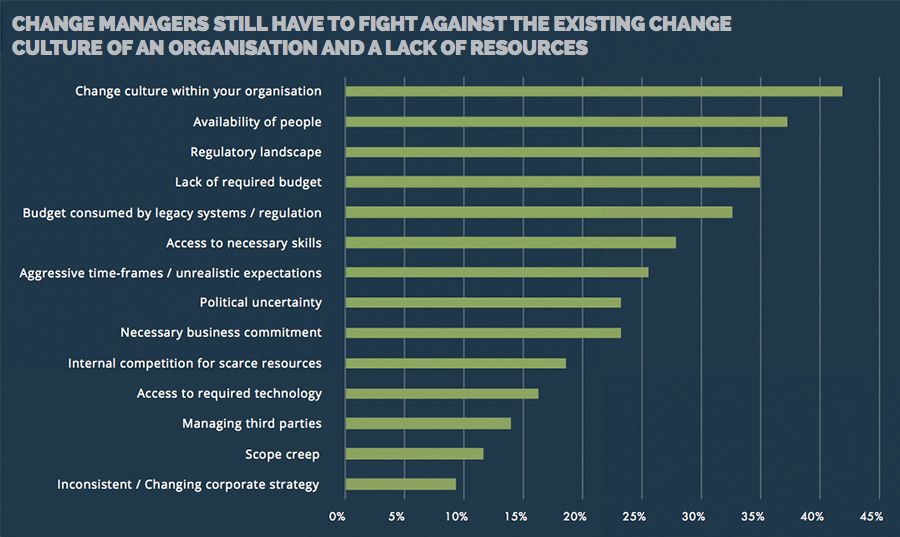 Meanwhile, another technological trend seems to have run its course. Despite new announcements regularly trumpeting the use of blockchain by banks, none have progressed to large-scale implementation. This echoes an earlier report from McKinsey & Company, which found there are emerging doubts in the technology, as large amounts of money have been sunk into it, but little of substance has been achieved.

Firms must move quickly to keep pace with these trends, as fintechs like Monzo and Revolut have both managed to achieve ‘Unicorn’ status during the past 12 months by building on the strengths of technology. If banks are to defend their market share from such competitors, they must become more agile in adopting new tech, while at the same time replacing legacy systems to stop the long-term diversion of funds from investment in emerging areas to keeping old systems online.

In the short-term, despite technology’s importance, Brexit is the most significant area of focus for the UK banking industry. Mike Hampson, CEO of Bishopsgate Financial explained that the overwhelming area of change planned for the year was Brexit. At 87% of respondents, the issue is clearly worrying the sector, with change managers still seeking clarity from politicians the best part of three years since the process began.

Hampson added, “As the date for leaving the EU approaches. At the time of writing, there is still a distinct lack of information on how the UK will conduct its exit from the EU. Unsurprisingly, Brexit is the main economic and political concern for organisations – a lingering shadow cast over the sector, with contingency planning likely to continue long into 2019… We expect the fallout from Brexit to have repercussions on change portfolios for the foreseeable future. This is not just an issue for UK-based banks, but also European banks doing business in the UK,” 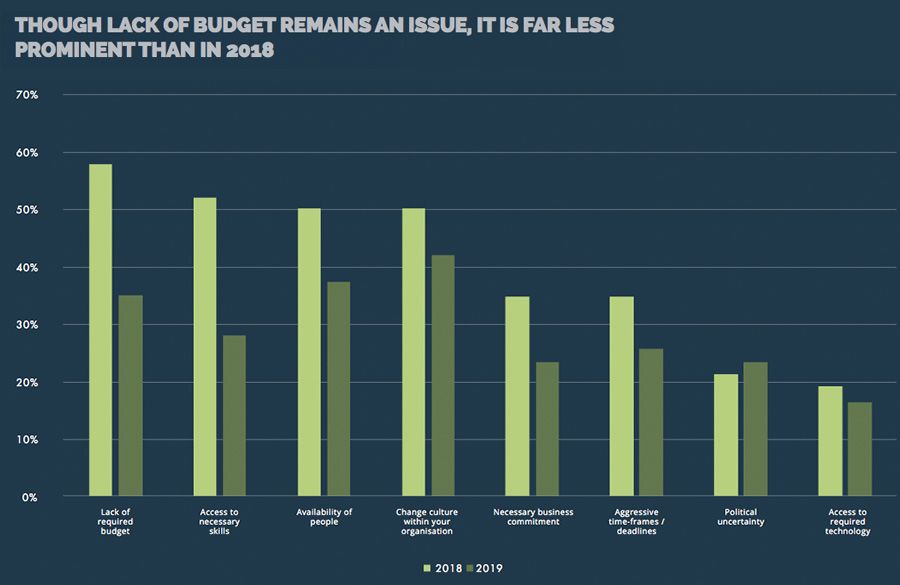 While the outcome of Brexit, does seem to have a rapidly approaching moment of truth, in terms of macro-economic trends another topic expected to grow in focus in the coming years is climate change. Bishopsgate Financial found that only 8% of respondents had significant change activity planned for this year regarding climate change, but with pressure from global protest networks including Extinction Rebellion highlighting the role of financial institutions in the unfolding climate disaster, regulators are soon set to examine plans from banks in more detail.

According to the study, banks would do themselves the power of good to take proactive action on the issue of carbon emissions and climate change sooner rather than later. From a corporate social responsibility angle, the researchers argued, taking matters into their own hands now “makes good business sense,” but warned that steps taken cannot be seen as “merely window dressing” because consumers are wise to such cynical ploys by now.

Relating to this, regulation in general remains an important issue for the banking industry. According to the study, firms could well be caught off-guard, due to the fact that no single, significant new regulatory initiative is being introduced for 2019. This is unlike the last few years, where the introduction of MiFID and GDPR, among others, were launched to keep the sector on its toes. Without a new, headline-grabbing regulation, firms must be wary of becoming complacent on the matter.

Hampson elaborated, “The on-going refinements and enhancements to existing regulation require significant effort as organisations strive to remain compliant. The regulatory focus this year is more about developing previous initiatives. GDPR is being implemented in other jurisdictions around the world, and ePrivacy takes it a step further. MLD4 extends the existing KYC regimes and will develop with MLD5 over the coming years.”

Finally, the banking industry will continue to hone its client focus and revenue growth. Focusing on revenue growth means that cost reduction is no longer the overwhelming focus for change leaders. This represents a major shift from the initial post-crash era, which since the 2008 financial crisis has seen banks focus on restructuring, cost reduction, and rebuilding balance sheets. This year, banks have finally opted to make use of the economic stability that has continued through several years of geopolitical chaos. As a result, they have focused more heavily on revenue generation, product development, and entering new markets. 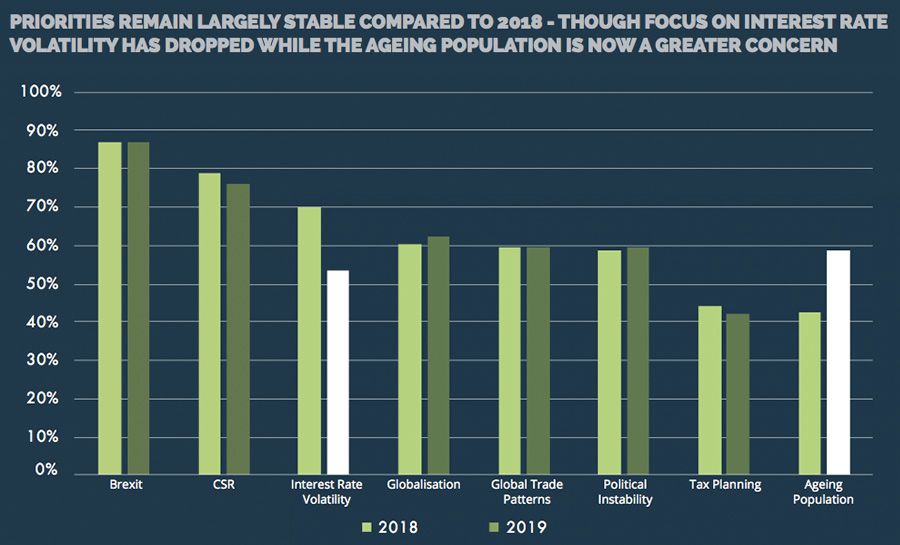 This is not only because banks feel they need to make the most of the solid market while it lasts, however. It is also because with FinTechs gunning for their customer bases, banks need to innovate to hold what they have. Relating back to digitalisation, then, many banks are making continued efforts to improve customer experience and journeys, rolling out new digital products to hold onto and attract new customers.

Now, according to the study, it is up to banks to deliver on these four trends. However, that is easier said than done. At the top of firms, there is often a bottleneck when dealing with resistance to change and making it a success. At the same time, they must find and recruit the right people for the work, something which organisations are working hard to attract.

Bishopsgate Financial found that lack of a required budget remains a major hurdle to firms looking to do so; the number of firms finding this to be the case has dropped significantly in the last year, however. At the same time, the access to necessary skills is less of a problem than it was 12 months ago. The only issue to have increased in the study is political uncertainty.