The first wave of Generation Z – people born between 1995 and 2010 – are entering the workforce, and according to Korn Ferry, they are making a positive impression on their coworkers. Compared to their slightly older millenial counterparts, Gen Z’ers are more optimistic, less stressed out and prepared to work harder.

In its survey, human capital consultancy Korn Ferry asked 800 professionals of all ages to evaluate their first experiences with Generation Z employees. The researchers found that compared to Gen Y’ers (known as millennials), Gen Z’ers are more motivated overall and more optimistic about the future.

Professionals also viewed Gen Z’ers as less stressed out than millennials; Gen Z workers are also perceived to care less about their salary and more about purpose-driven work. 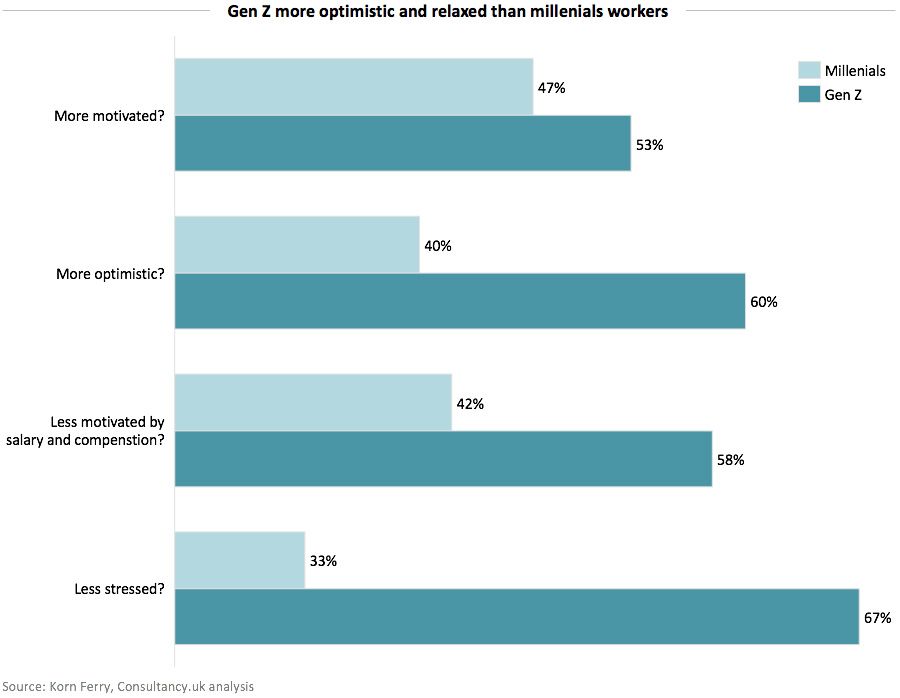 According to Mark Royal of Korn Ferry, the younger group is “ready to take on the world.” One of the main reasons explaining the difference from the previous generation, he says, is undoubtedly the impact of the 2008 global financial crisis. “The youngest workforce has experienced nearly a decade of prosperity in their formative years, whereas millennials are more influenced by living through recession,” Royal noted.

Interestingly, Gen Z’ers seem to have less stigmas hanging over them compared to when millennials first started entering the workforce in the early 2000s. Millennials were then viewed – in particular by older workers – as entitled, lazy, self-absorbed, and disloyal to their employers. In Korn Ferry’s survey, Gen Z’ers face much less of such stereotypes, highlighting the more positive image they enjoy.

For organisations, the growing number of Gen Y’ers and Z’ers on the workfloor – in 2020, they will account for 70% of the workforce in mature economies – means that they need to adapt. High on the agenda should be topics such as catering to the purpose-driven needs they have, finding more digital-savvy ways to recruit and retain them, and refining HR policies and performance management to match changing career paths and goals.

Personalisation will herein be a major differentiator, explained John Atherton, Head of Leadership Development, Assessment & Succession at Korn Ferry for the UK and Ireland.

“Younger people are now getting larger responsibilities earlier in their careers, so it’s vitally important to understand what is driving younger generations and what kind of support they need. To do this organisations need to differentiate their workforce according to different needs and at the same time connect on an individual level with people’s sense of purpose.”