As firms continue to chase the potential of data to improve their sales and operational efficiency, the same old problems are preventing them from realising the true value of their data-sets. According to a new study, questions of governance, ownership and skilling the workforce are still hamstringing companies’ efforts to wield data effectively.

For some time now, data has been heralded as the new gold, with a majority of UK organisations applying big data for insights in order to boost their productivity and potential sales. The problem is, for all the hype, only a minority of organisations that look to use data are extracting its apparent value. Previously, poor security and compliance measures, a shortage in skills and too little knowledge about the topic have each been cited as the main bottlenecks for successful implementation.

According to a new survey from Coeus Consulting, finding a way over these hurdles will be more important than ever for modern businesses, with 74% of organisations acknowledging that data is a critical business priority. At the same time, however, 80% still potentially see data accountability and management as just a technology problem – suggesting the extraction of the true value of data may remain an enigma to many companies. 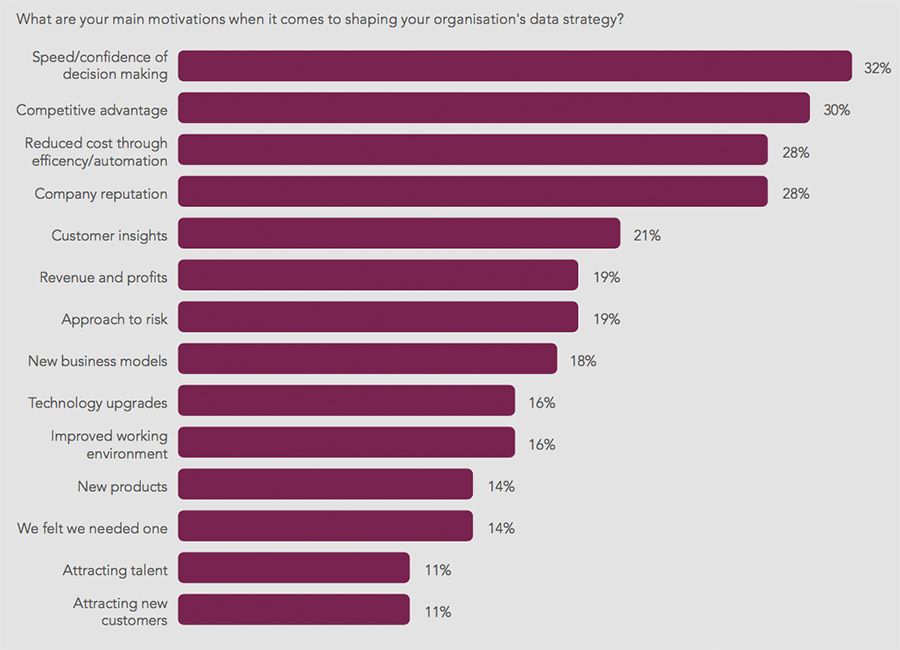 So why is data such a priority? Informed by a poll of 123 senior IT and data leaders from organisations with revenues over £500 million, Coeus found the largest 32% chunk of respondents believed the idea of being able to make fast, accurate decisions based on data analytics was top of the agenda. Relating to this, a further 30% felt that data strategy could bring a competitive advantage to their firm amid a crowded market, while an equal portion of 28% thought that data could drive cost reduction drives and improve a firm’s reputation due to its improved accuracy and efficiency.

In terms of what firms are already using as part of their data strategy, the largest number of 27% said elastic search tools were now widely used in their firms. This was followed by 22% who said data lakes were commonly deployed. The aspects of data and digital technology which tend to be most hyped by businesses were less common however, and while 21% of respondents said they had machine learning widely in place, only 13% said the same of AI and automation.  This looks set to change rapidly, as more companies said they were set to roll out AI than any other data strategy aspect. 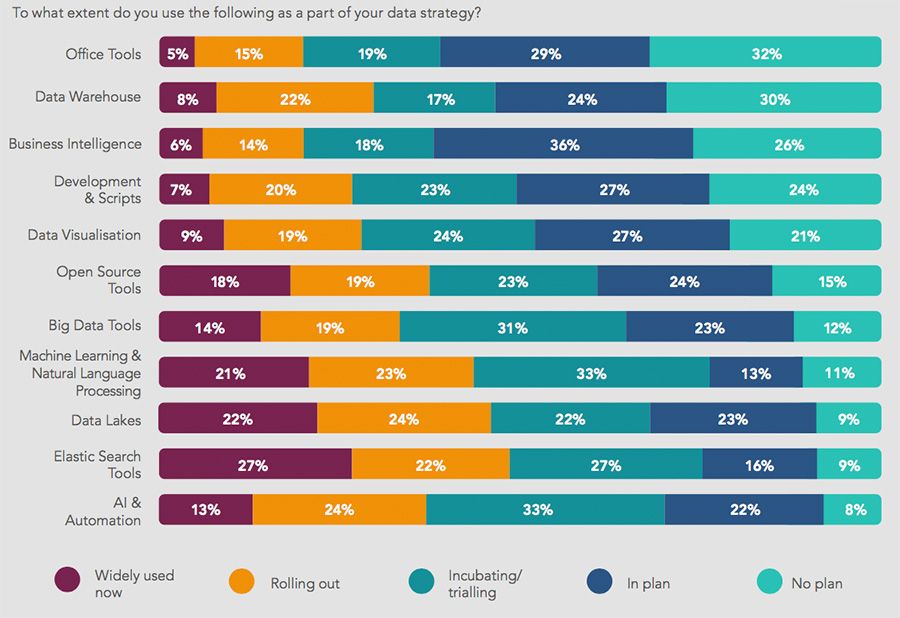 At present, there seems to be a substantial execution gap in terms of what companies hoped for, and the benefits data initiatives are actually yielding. While 43% of respondents told Coeus data had improved customer insights and their ability to take predictive decisions based on that, this has not translated into a substantial value-add.

Only 14% suggested their data initiatives had improved their sale of data assets, while 12% said that sales in general had improved as a result of their data efforts. At the end of the day, these are the areas which are most important to businesses investing in data, and at present they are being delivered on the least. The question is, why? 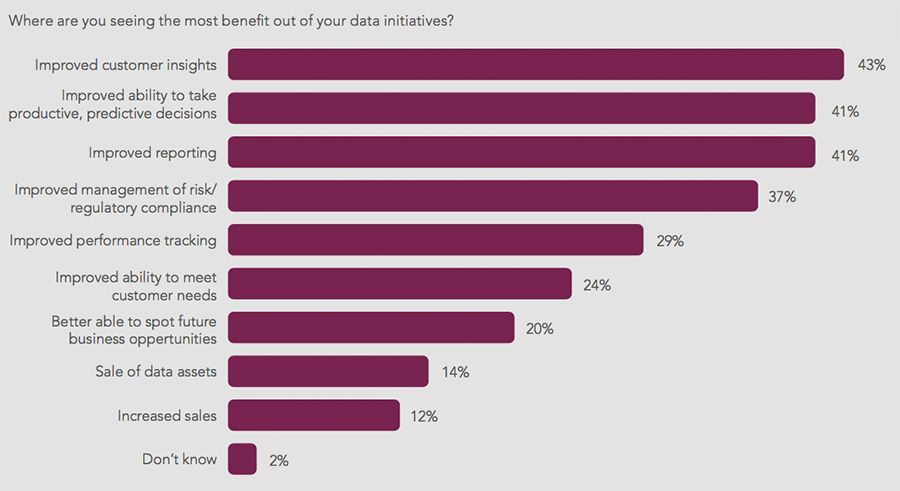 Coeus’ report suggests that the skills available to many firms may be one of the key problems. A sizeable 27% of respondents noted that the scale and complexity of data-sets was tripping them up, suggesting they need to scale up their workforce, or invest in training them to properly take advantage of data-sets.

At the same time, 24% of those polled said governance and ownership were obstacles they were struggling to overcome. The question of who owns data is proving a particular issue, with the survey finding that 80% of the large organisations surveyed believe accountability for data strategy rests with technology leaders such as IT Director, CIO or CTO. Additionally only a quarter of organisations currently elect to have a Chief Data Officer, and even less place accountability with others in the C-suite. 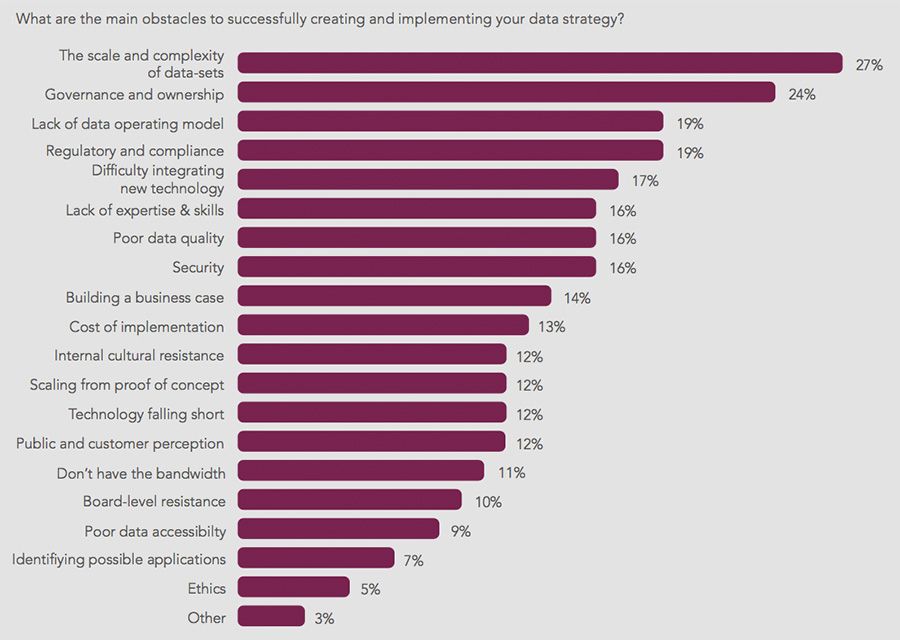 Coeus Associate Director Richard Graham said of the findings, “Businesses need a change of mind-set and approach right across the organisation, and the challenge is more than simply collecting data and making it available. Being data-driven is an imperative for most organisations… but organisations need to ensure they have certain fundamental capabilities in place before trying to achieve digital transformation. There seems to be a motivation to be ‘AI first’, driven by the perception that most organisations are already ahead… rather than getting to grips with untapped value in existing data, and how best to make use of it.”

In order to help businesses change their approach and get better results from their data strategy, Coeus issued a series of guidelines at the end of its report. Key steps included applying context to all data, regardless of structure, location or origin to clarify ownership; enabling data to be structured in locations that support easy, shared access; and building services and packaging data so it can be shared securely using standard rules and access policies.

The researchers also recommended combining data to provide a unified data view to make it operationally robust; establishing data and information policies; and measuring and monitoring ROI by defining what success means to each individual business, rather than fear of what others may be achieving.