Automation can improve the accuracy of a number of repetitive tasks in the world of professional services, enabling firms to shift resources to value adding activities. The industry is one of the fastest adopters of the technology, with around one-fifth of CFOs in the sector viewing automation as their most important investment priority during the next five years.

The continued march of Artificial Intelligence (AI) has brought with it the potential for improved efficiency of resources, heightened productivity in manufacturing, and even the potential for low-cost medical care in the developing world. This is set to drive a colossal re-alignment of labour; according to consulting firm McKinsey & Company, while less than 5% of jobs could be entirely replaced by technology, over 60% of all work activities could be in some manner automated by 2055.

The consulting industry is no exception to this growing trend. A recent study by The Access Group found that consulting is more automation-friendly than the work of architectural technologies, librarians and opticians, placing it among the 20 roles most at risk from disruption in the data’s ‘professional occupations’ category. 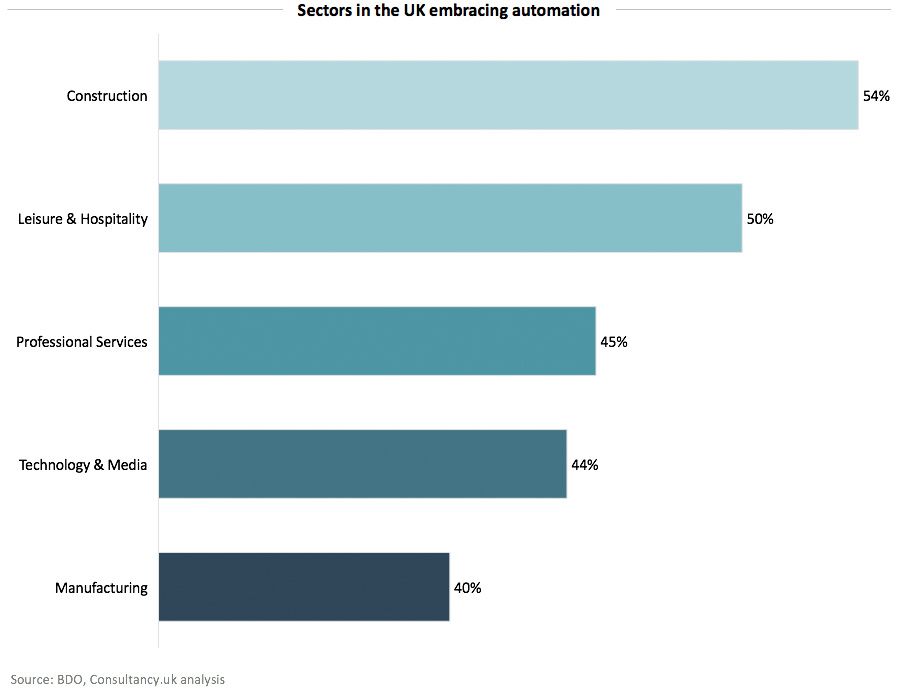 Commenting on the findings, Neil Williams, Partner at BDO, said, “Professional services firms may not have been as visionary and enthusiastic as others in the past, but they are no longer the technology sceptics they were once considered to be. CFOs are clearly optimistic about the business potential of automation and technology, investing at levels above the national average in both staff training and new technologies.”

Professional services firms are ramping up the automation of key processes, too, suggesting the sector is unlikely to take its foot off the gas any time soon. Around 18% of CFOs in the sector view automation as their most important investment priority during the next five years, while only investment in people (33%) and organic growth (33%) rank as higher priorities. On top of this, 88% of businesses in the professional services industry told BDO they had already automated a key process in the last year, again outpacing the national average, which stands at 87%. 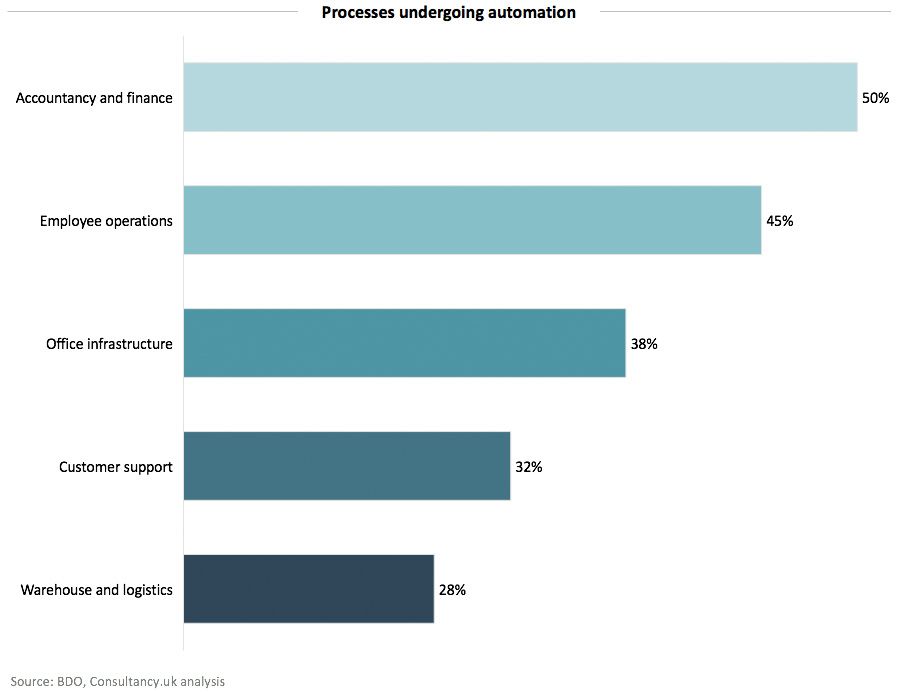 Adopting such revolutionary technology into the heart of firms will not occur effectively without some significant structural changes, though. While services firms might feel justified in commoditising their output due to the upped quality of work, they may still struggle to convince clients of those benefits in a UK economy that continues to enjoy sluggish growth, at best. At the same time, failing to invest in the up-skilling of employees who work alongside automated processes may well cancel out those perceived benefits.

As a result, firms have acknowledged that they will have to invest heavily in training, as the value-adding elements of their work will still have to be human-orientated. BDO found 45% of CFOs and Finance Directors agreed that automation has led to an increase in spend on training, ahead of the 39% national average. Senior leaders feel that workers need to be trained up with developed skill-sets to be equipped to use the new technology to complement their role.

This emphasis on the human side of professional services also means that unlike many other sectors, few workers in the sector seem to fear the upcoming changes. Of the professionals in the industry polled, 55% felt that automation represents an opportunity for their business, compared to 9% who considered it a threat.